skip to main | skip to sidebar

"Rebel Without A Cause" Essay 3 - Revision 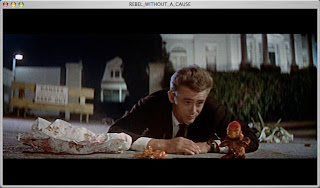 The title sequence of “Rebel Without A Cause” exists to capture the audience’s attention and to pull you into it’s story, with a devastating use of the color red, and the magnetic innocence of James Dean wandering the streets alone, drunk, and directionless.
When Jim finds the toy wind up monkey, in the first shot of the film, clapping it’s cymbals in the middle of the street, it speaks volumes about the way that Jim views himself and the world, and acts to establish a tone and resonance throughout, eventually leading back to things you might not have thought about before, later in the film.
The titles, first off, are the most prominent part of the scene, not James or the monkey. All of the text consists of huge bold red letters that literally chew up the entire shot with words stretching from screen left to screen right. Personally, if the color red where not so important to the film overall, I wouldn’t have chosen this type of title exposition to be in any kind of film that I hoped to enjoy. It makes you uncomfortable, it messes with the focus of your eyes, and it dominates everything else behind the text, much like the way a matador flashes a red blanket to get a bull to charge him. What a statement to make about the use of titles. If Nicholas Ray, the director, is the matador for this film, than what is going on in this scene? What’s going on is, Ray is putting a barrier between you and the character we center with in the film, almost as a way of saying, “I dare you to challenge what this film is going to say” or, even more simply, “I dare you to enter into Jim’s world and see what he sees.” Now the audience can’t help but watch and be attentive. Now, what do we see behind the red curtain?
The toy monkey is clapping its cymbals together as Jim stumbles upon it. At first, the doll is going by itself, which gets Jim’s attention, but then winds down to nothing, and he frowns disapprovingly. The fact that it was clapping by itself is strange enough, because there is no way it would be moving unless someone had already wound it up to be moving on screen before it is even discovered. Thus, the act of the monkey moving has meaning that doesn’t pertain to just its actions and needs to be further investigated. James reaches out, winds the monkey a few times, and then watches it like a little kid until it winds down again. Covering the monkey with some trash as a blanket, they both lay on their sides in the same direction, quietly and unmoving, as the sound of police cars gets louder and louder.
The meaning that I have linked to this exchange is the idea that Jim in some way relates to this monkey, and, if you analyze this moment and the elements of their similarity it lends itself to reveal a lot about the James Dean character’s motivation and despairingly grim self image.
At this point in his life, Jim feels directionless and lost, without a reason to exist except for the occasional defense of his honor. So, in a way, he thinks that he’s just this wind up motor powered device that has the sole empty purpose of making a ruckus when he gets wound up. Other than that, he’s just living through these meaningless movements and relations over and over. He’s a toy in the way that, whenever he’s done with his perpetual cymbal crashing, his only means of existence, (and registered contextually by him beating up kids or crashing cars), his parents just pick him up and take him off to some other place and he gets wound up again.
This is the first time that Jim is physically linked to the color red, except for the titles, which exist more abstractly and for the audience. Later on, you notice the monkey’s red hat is the same color as Jim’s sport coat in the film. The red has pulled us, and him, in the world of the new town, and leads us throughout all of the interactions with other characters and story. When Jim is taken to the police station, the car that the officers bring him in has a red siren light on its hood, and later on a close up image of the red hated monkey is juxtaposed in the foreground, out of focus, as we see the character Judy, played by Natalie Wood, in focus in the background. Now we are lead into an introduction of the disparity that she feels relating to her parents and why she is out wandering the streets late at night. 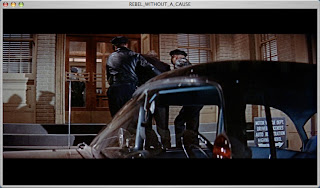 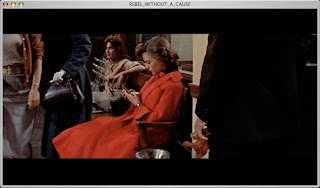 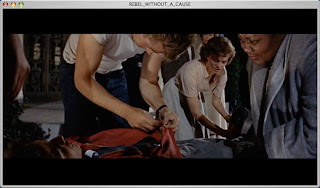 So Jim thought, am I just crashing two cymbals together in order to amuse or entertain the gazes of the people around me? Or, do I really feel good about the decisions I make in life and do they make me a better and stronger and more assured person because I know deep down that I am not some mindless thing and there is good and honor in the world that I just have to find a way to harness and take control of.
Conceptually, this essay tried to explain the presence of the cymbal monkey in the credit sequence of Rebel Without A Cause and explained how Jim is a toy in his universe until he eventually decides to break free of himself and become a real person. All in all, we’re just spinning our tires until an incident snaps our attention back and we find purpose and understanding in a seemingly pointless and cold world.
Posted by Cameron Walker at 8:29 AM

Read this fabulous site and invested in a steam shower and never glanced back, fantastic resources on this website cannot say thanks enough. WritePaper.Info